How can you tell when a surfer has right of way over another wave rider? What is priority in surfing?

Surfing is the sport of catching waves before they break. As a result, surfers need to position themselves in the lineup so that they can catch the rollers in the right spot, i.e., where they start to break.

Every wave breaks to the right or left and, like in any civilized street system, there are rules for each player. However, the ocean has no police power or ticketing systems.

In surfing, we like to call it "surf etiquette." It's an informal code of conduct. But wave priorities are more than gentleman's rules - priorities prevent crashes, injuries and damaged surfboards.

Paddling into the path of a surfer who waited for his dream run, and is riding the wave down the line at full speed is extremely dangerous and rude.

As a general rule of thumb, you'd say that surfing is "One man, one wave," except when an A-frame wave peels off to the right and left offering two different riding opportunities.

The following picture shows a wave that can be ridden, simultaneously, by two surfers - one goes right, and the other goes left. 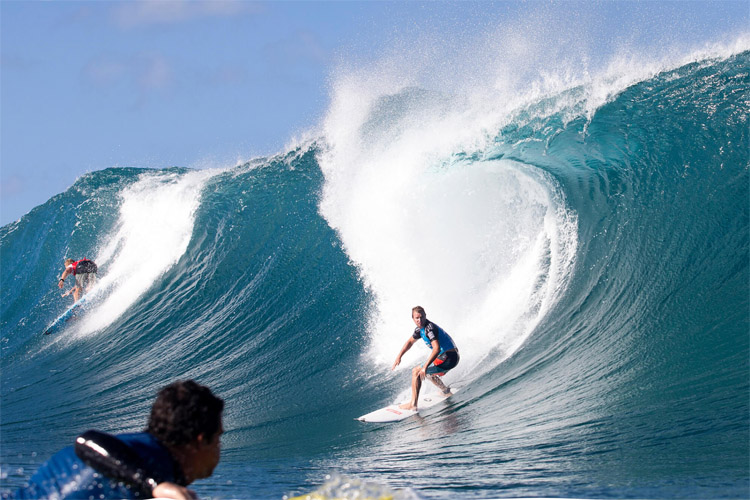 Surf priority rules are especially important and relevant to beginners and first-timers, as they often inadvertently drop in on others' waves causing multiple irritating outcomes.

Remember that the surfing's priority rule only applies when a surfer takes off. There's nothing wrong when five riders paddle for the same wave.

In the end, it all comes down to respecting others and vice versa. There are two wave priority rules:

In the example below, surfer in blue has priority over the red and black surfers. If the blue surfer doesn't catch it, priority switches to red. The surfer in black may only drop in if the other two don't ride that left-hand wave.

That said, surfers without priority should never drop in, and if by accident they do so, they must kick outor pull back their boards.

Unfortunately, a small minority of surfers will always try to gain priority, even when they've just finished riding a wave. That's called "snaking," and it's considered a disrespectful attitude.

"Snakers" rely on their physical advantages to get all the waves from other people. They paddle around surfers with priority to get closer to the peak. However, the day will come when someone stronger and fitter will pay them back in the same coin. It's called karma, and it frequently happens throughout life.

So, enjoy surfing and play by the rules - it will be worth it in the long run. If, for any reason, you make a mistake or unintentionally drop in on a fellow surfer, apologize for it, and everything will be okay.